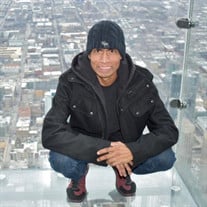 Luis Rodriguez De La Cruz, age 54, passed away unexpectedly on April 16th, 2022 at his residence. He is survived by his wife, Lilia Flores Martinez; his sons Zach Ramon Lerma, Angel Diego De La Cruz; his daughters Louisa Leticia De La Cruz, Adryana Bianca De La Cruz; as well as his siblings: Imelda, Martha, Rosa, Andres, Eduardo, Francisco, Ricardo, Roberto, and Roman Rodriguez De La Cruz, along with nephews and nieces and special friends Benito Cortez, Primy, Jose Argot, and Jose Garcia. He will Have a Memorial Service 12 p.m. Saturday, April 30, 2022 at Boaz Carr Chapel with Visitation from 11:30 until 12 before the service. He worked at Udakas Poultry often working very late and early hours of the day allowing him to provide for his family and loved ones close and afar. Luis enjoyed taking road trips and vacations with his family. He lived to see different cities around the US, such as: New York City, Chicago, Atlanta, St. Louis, and more, as well as the beautiful mountains and nature sites of the south. Whether at work, home, or on his own, Luis was always eager to help his loved ones, neighbors, and even strangers. He is now reunited with his sister, Maria; brothers Pedro and Lazaro De La Cruz Rodriguez; his father Antioco De La Cruz Medina, and his mother Leonor Rodriguez Martinez. If you noticed that you were not mentioned, please know that you were very special to him as Luis' love was extended far beyond blood and this passage. His immense kindness and love as a father, husband, grandfather, brother, uncle, and friend will be greatly missed but never forgotten. Boaz Carr Funeral Home Directing

The family of Luis Rodriguez De La Cruz created this Life Tributes page to make it easy to share your memories.

A comforting word from you means a lot.

Send flowers to the Cruz family.